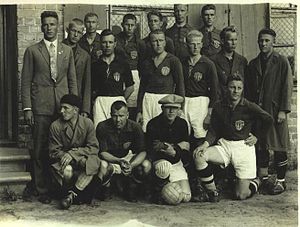 Jalgpalliklubi Tallinna Kalev (Football Club Kalev Tallinn) is an Estonian football club, based in Tallinn, that plays in the Meistriliiga, the top level in Estonian football league system. Founded as Jalgpalliselts Meteor in 1909, the club changed its name to Tallinna Kalev in 1911. They play their home matches at the 11,500 seater Kalev Central Stadium, Tallinn.[3]

The first official football game in Estonia between JS Meteor, predecessor of JK Tallinna Kalev, and Merkuur on 6 June 1909

On the 1920s the biggest opposition of Estonian football was between JK Tallinna Kalev and Sport Tallinn. The first derby of Tallinn was played in a friendly match between the two teams on 9 May 1920. From this game on, the stadiums with capacity of 3,000 were almost always sold out for the matches between Kalev and Sport. In 1923, Kalev managed to win their first Estonian championship, when they defeated Sport Tallinn 1:0 in the decisive match. Most of the squad, with players like Eduard Ellman-Eelma, Arnold Pihlak and Johannes Brenner, formed core of the Estonia national football team, which competed in the football event of the 1924 Summer Olympics in Paris. In 1925, a misunderstanding and conflict between the key people of ESA Kalev and players culminated with disqualification of the club from Meistriliigaand disappointed players joined Tallinna Jalgpalliklubi.

Against all odds Tallinna Kalev achieved their second championship. This time the old rival Tallinna Sport seemed to be better, but in the competition of best four teams they could not beat young team of Kalev. With the game ending 0:0 and SK Tallinna Sport went on to beat Jalgpalliklubi Tallinn 3:0, Tallinna Kalev now needed to win Võitleja Narva with at least 8 goals. By half-time, Kalev led 7:0 and adding four with the remainder of the game meant that Kalev clinched their second Estonian championship after 7 years.

There is a speculation circling around Estonian historians, that Kalev won the championship thanks to match fixing. “Võitleja Narva and their goalkeeper Viruvere looked paralyzed, they let Kalev score 11 goals. Aleksander Lugenberg-Mändvere came up with an idea to help Kalev win championship, he was a member of the JK Kalev board and from Narva. Somebody asked him after the game, ‘How much did you pay for a goal?’ and Lugenberg reportedly answered ‘250 krones’.”

Kalev in the Soviet League

In 1960, Kalev became the first and the only Estonian club to appear in the Soviet Top League. An opportunity arose when Football Federation of the Soviet Union decided to involve more Soviet Republics and regions to the Top League, including Baltics. Their stint in Class A, as it was also known at the time, lasted for two years. The club finished 19th in 1960 and 22nd in the 1961 season in 22-team league. In their first season, they managed to finish 19th of 22 teams, finishing in front of only three teams, Spartak Vilnius, Neftyanik Baku and Chişinău Moldova. The following season remained their last season in the top tier of Soviet football, as they were placed at the last, 22nd place and were relegated. Despite poor results, Kalev managed to play some good games, for instance 0:0 against Lev Yashin’s led Dynamo Moscow and a 2:2 with Spartak Moscow, who finished 3rd that season.